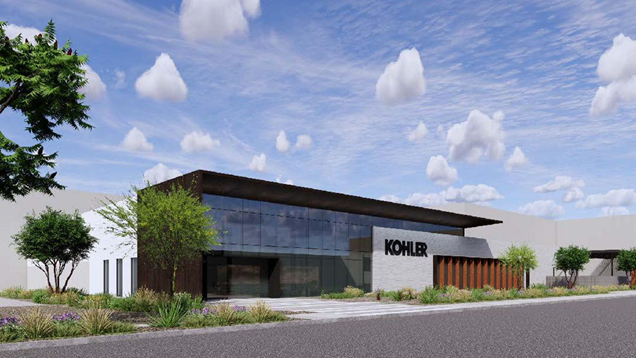 The Wisconsin-based company’s project is valued at $300 million, and could have 425 employees, according to a development agreement the Casa Grande City Council approved in mid-November.

Kohler’s designs for the building gained an approval Thursday from Casa Grande’s Planning and Zoning Commission. Brian Sandstrom, senior project architect with Phoenix-based Ware Malcomb, said the facility would produce Kohler’s Sterling-branded bathtubs and shower stall inserts. An industrial press standing about five stories tall with the ability to produce 350 tons of pressure per-square-inch would produce those molded tubs made from the Vikrell poly resin and fiberglass material, he said.

That building would be on 216 acres in the Pinal Technology Park at Ethington and Clayton roads. There’s room on the Kohler property for the 1 million-square-foot first phase and a possible future expansion.

Based in Kohler in Sheboygan County, Wisconsin, the company has more than 50 manufacturing locations worldwide. In addition to bathroom fixtures, it produces cabinetry, tile and lighting, engines, generators and clean energy technology.

Casa Grande and Pinal County officials have agreed with Kohler to pay for road improvements for its facility and the overall business park. A rail spur also would be constructed to serve Kohler’s facility and other business park tenants.

Walbridge, a Detroit developer, also received approval Thursday for two industrial buildings totaling about 1.2 million square feet at the Pinal Technology Park. Those buildings do not yet have announced tenants.