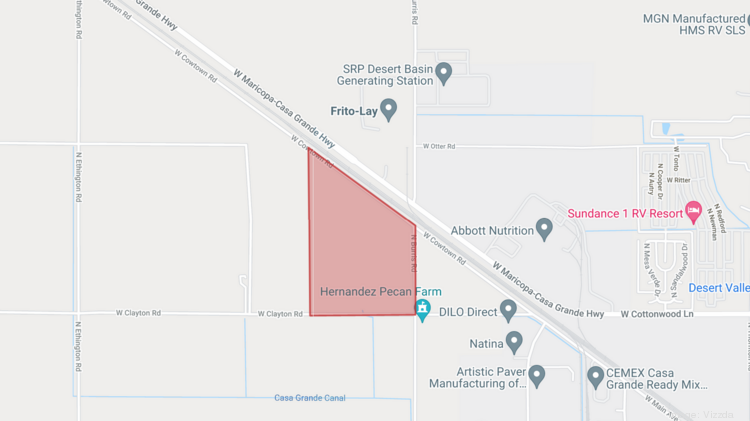 The massive investment from Taiwan Semiconductor Manufacturing Co. has already been lauded as a spark for development in the far northern part of Phoenix, but a group of suppliers that will service the fabrication facility are starting to gather in another location: Pinal County.

“We get a tremendous amount of calls from suppliers to the computer chip industry and suppliers to the electric vehicle industry,” Kirk McCarville, a broker with Land Advisors who specializes in Pinal County.

The land Chang Chun Group bought was part of the Pinal County Technology Park, which had previously been an assemblage for Nacero, a gasoline producer that uses natural gas. However, Nacero’s plans changed, and the Casa Grande plant never came to fruition, McCarville said.

“They had done a tremendous amount of due diligence for the site to de-risk the site for development,” McCarville said.

The company gave much of the research they had done to the city and county to use for future development on that site, and Mcrville worked with city, county and private sector leadership to rebrand the area and market it for new users.

The technology park is also where Kohler Co. plans to build its $300 million manufacturing facility.

Another supplier to TSMC, LCY Chemical, has also already closed on a location in Casa Grande. The company bought 34 acres near Burris Road and Gila Bend Highway for $5.5 million, according to Vizzda.

McCarville told the Business Journal that he and his colleagues are working on deals with another three TSMC suppliers that will close on sites in Casa Grande after the beginning of 2022.

There are a number of factors that make Casa Grande and Pinal County an attractive place for the suppliers, he said. Overall cost for a site that is rail-served in Casa Grande can be a quarter or a third of the cost of a similar site in Phoenix, he said. The pro-business environment and the eagerness from the city and county to work with business, as well as the air quality certification process and the permitting process can also be much easier and faster than in metro Phoenix, he said.

“We are dealing with almost explosive growth,” McCarville said of the manufacturing and industrial growth in Casa Grande and Pinal County, and added he and his business partner are looking forward to working with their pipeline next year, which is already shaping up to be very active.

TSMC is already under construction on its plant in north Phoenix near Loop 303 and Interstate 17. The city of Phoenix has also designated some areas in north Phoenix as “supplier sites” that are designed to work with TSMC’s fabrication facility.

Mack Real Estate Group bought the land for the supplier sites at an Arizona State Land Department auction and plans to build about 4 million square feet of space on the sites, near 7th Avenue and Alameda Road, to be used by various companies that work alongside TSMC. Sunlit Chemical, a chemical manufacturer that supplies to TSMC, already bought land from Mack in north Phoenix for a facility.